Cider… What’s it All About?

Well, to start with, it’s a very old and ancient drink. Apples have been around since the dinosaurs died out, which is about 50 – 60 million years ago (in those days you couldn’t buy cider online).

For millennia, these trees grew and cross pollinated. When primates and humans appeared, they’d find a tree and take a bite from the fruit and never knew what flavour they were going to get. In fact, the most really disgusting ones, incredibly bitter and tannic, are the best ones for cider and are usually referred to as ‘spitters’!

Here’s a Michael Caine moment and not a lot of people know this:

The Latin name for apples is malus domestica rosaceae, making it part of the Rose family. Originally it was growing wild in forests around Kazakhstan in central Asia, where it can still be found today (malus sieversii) although we’re not sure if they have apple cider for sale online there.

Anyway… the Romans (who thought they knew it all) came to Britain in 55BC and found the locals drinking cider then. They also thought it was pretty good and soon it was being drunk all over the Roman Empire. Then the Germans got a taste for it and later the Normans, who brought apple orchards to England in the 9th century and indeed the very word cider or cidre, as they called it.

Tracing it back however, it does seem that it originated from the 6th century BC Hebrew ‘Shekhar‘, meaning strong drink. Back to the real thing… cider. So the Romans arrived and found us already getting pissed on fermented apple juice, which we were grinding on big stone milling wheels which, by sheer coincidence, is possibly one of the origins of the word ‘cockeyed’.

Apparently, to ensure that the two grinding wheels sat properly on top of each other, one had a lump in the middle referred to as the ‘cock’ while the other had a hole called the ‘eye’ and it was essential to ensure they both mated properly so they rotated correctly.

When these were later used for milling grain to make flour, usually in a confined space, the miller had to keep a sharp eye on the stones so they didn’t go off kilter and create sparks because, rather astonishingly, flour dust can explode. Therefore the miller was ‘cockeyed’.

How Is Cider Made? 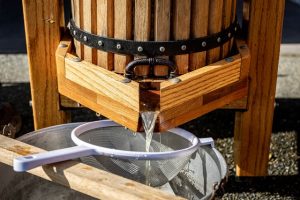 You’d think it was simple… wrong (but it is boring, trust us).

First off, cider is a blend of different apples, generally four or five types mixed between those with a neutral base, those with acidity, some with bitterness and some with tartness (which is not the same as tartiness, that’s another thing altogether and is the ‘condition or character of being a tart’). These ‘chosen ones’ are then washed, later ground and then pressed whole because much of the flavour comes from the skins.

It takes between 11–14lbs (about 6kg) of apples to make 8 pints of cider. That’s just rough cider and you can buy scrumpy cider online. However Cockeyed Cider provides carefully blended traditional apple cider, so you won’t find that here! To be honest, making artisan, craft cider is a really boring subject unless you’re a real anorak and, if you are, you can Google it yourself.

Making commercial ‘run of the mill’ cider is far more complicated as you’ll need to be a chemist rather than a cidermaker, adding all sorts of stuff. If you look at the ingredients listed on a tin or bottle of a commercial cider, rather than Cockeyed Cider, you’d be horrified.

As an example, here’s what you can expect to see when looking at the ingredients of a commercial cider; “fermented apple juice & glucose syrup, water, sugar, carbon dioxide, acid: E270, E330, antioxidant: E224 (sulphites)”.  NB: not brand specific, just taken from a generic Google search.

Actually, most of the alcohol they use is derived from fermenting corn starch syrup, which is then diluted with water. Fizzy cider is made by adding more sugar and yeast than naturally occurs. This generates carbon dioxide and you get fizzy cider; that’s why Cockeyed Cider is flat.

We don’t add extra ‘stuff’ apart from fruit to make our flavoured cider. This could be worth a try, it’s great for summer!

In a large jug or bowl, mix 2 parts of your favourite Cockeyed traditional cider, all of which you can buy as bag in box cider online. Here are a few options for you to consider: 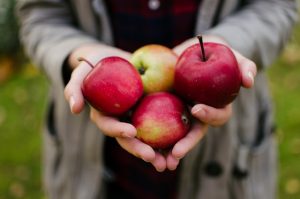 There are so many weird, wonderful and interesting things to know about apples. As a producer of both traditional cider and fruit cider, we love being up on our cider knowledge. Below, we’ve outlined some of favourite facts about apples!

We hope you’ve enjoyed learning about cider and apples with Cockeyed Cider. If you have any questions about how we produce our cider or wish to discuss which of our products might suit your individual taste the best, please get in touch with our team.